Home » Social News » Under 11A Premiers

Our pre game focus was on a Team Effort.

The boys were fired up and keen as they were led onto the ground by our captains Blake Scott ("Scotty") and Josh Davies.  The first quarter was a closely fought contest with our midfield in Blake, Josh, Sam and Luke Wilson ("Willo") driving the ball forward at every chance. Noah started well with some great grabs at centre half back, and Adam keeping his backline in order.  Isaac after playing a great game in defence two weeks before, quickly found his feet on the forward line this week.  With both teams finding it hard to score, it was our hard attack on the ball that found Mitch Turner slotting through the first major from a tight angle.
¼ time  Ver 1.0.6  Moor 0.

The 2nd quarter was again tightly fought with wingers Ethan and Billy starting to find some space and run. Our half back flankers Luke Daniel and Luke Weymouth were both very strong and gave us great run from defence.  We had plenty of marking options up forward with Paddy, Mitch and Dru crashing packs and giving our rovers every chance. Archie, Kobe and Zac Taylor looked dangerous and had Mooroolbark defending hard, trying to stop them.  We had a lot of the ball in our forward line, but credit to the opposition as we found it hard to score.  Charlie took a strong grab 1 minute before half time and with a beautiful 35m kick we had our 2nd goal on the siren.
½ time Ver 2.1.13 lead Moor 0

3rd Quarter - The Premiership quarter.
We knew Mooroolbark would come out hard and the backline was going to be under pressure.  With our superstar last line of defence in Luke Heaney, Adam Lukan and Will Marie ("Biscuits"), scoring was never going to be easy for them.  The boys constantly harassed and tackled Mooroolbark to keep them to 1 point for the quarter. Noah was again in everything, with strong grabs and spoils from behind and our back flankers in Luke Weymouth and Luke Daniel cleaning up.  Sam Ryan (Joel Selwood) was brilliant.  Both he and Josh Davies were under every pack with both teams only scoring 1 point each for the quarter.
¾ time Ver 2.2.14 lead Moor 0.1.1 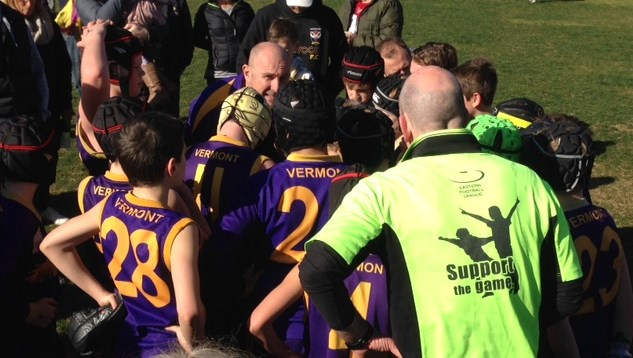 The Final Quarter
Once again the focus was for a team effort to get us home.  We had usual suspects Luke Wilson, Charlie and Ethan roving the packs around the middle, Dru, Boxy and Zac applying great forward pressure.  Big Paddy and Isaac were great targets, with Archie and Kobe roving to them, they both almost got amongst the goals.  Finally the goal drought was broken with a great captains goal from "Scotty" after roving to himself in the ruck.  Luke Heaney and Will were being real scrooges in defence and wouldn’t let Mooroolbark kick even 1 goal with desperate tackling. It was a great TEAM EFFORT by the boys to win
FINAL SCORES Vermont 3.3.21 def  Mooroolbark 0.2.2 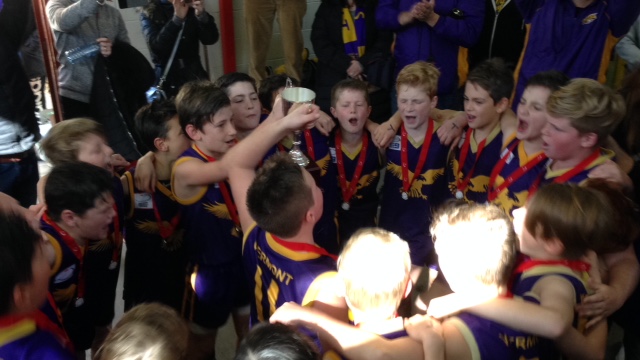